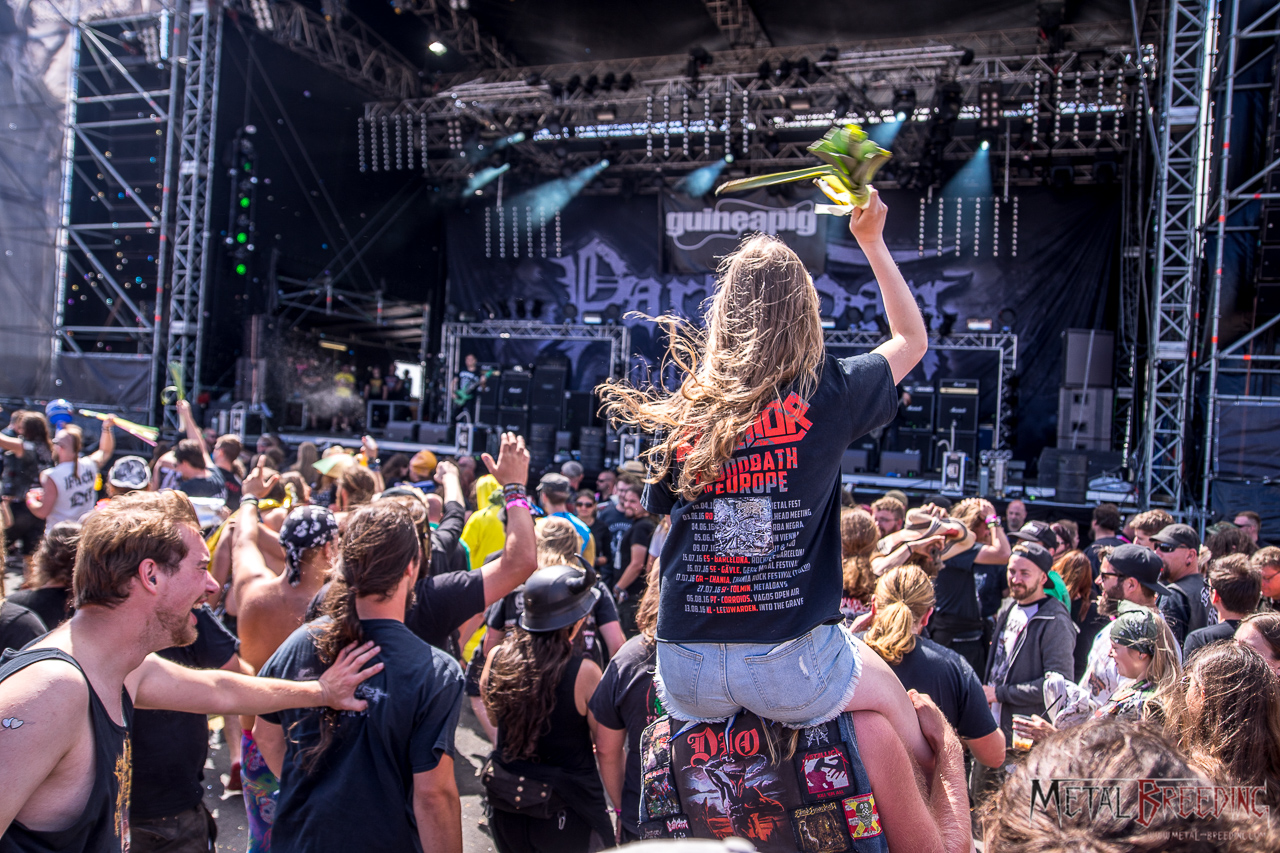 Friday the second day of Party.San which great weather sunshine. traditionally in Second of Party.San starts with Grindcore band. Their most of Grindcore fans with a special costume, toilet brushes and confetti in their hands moved towards the festival ground it was quite crowded for early noon in stage ground which is waiting for the party begins.

Start with a Grindcore band from Italy Guineapig. The circle pit started immediately, and happy people slamming and walking or running in circles were continually in front of the stage. Look very colorful at that time, which a lot of toilet paper and toilet brushes flying in the air. The trio Italian guys know what it takes to make wakeup and entertain the audience, which simple riffs with fat distortion guitar sound following groovy drum, growl vocal it makes you not just stand. Now I really wake up. It was enjoyed seeing their show, the great Opener band.
Continued with Black Metal. The Committee,

which may be referred to by bands like Dissection, Mgła or Uada. The band is completely masked and dressed in uniforms reminding one of the Soviet officers including, jackets, belts badges, and stars, which influence of Russian folk song mixed with melodic Black and Doom Metal. Although the group describes itself as apolitical, great musical specials the blastbeat drummer, but their not much movement on the stand is not really matching with the song what they are playing at the moment.

Next, time for Deathgrind from France Benighted one of the band I’m looking forward. One of Europe’s best modern death metal, have delivered high-speed brutality for 20 years, with extremely catchy grooves and nasty grind attacks. Straight to the point and ultra-brutal, the fiver from the Season Of The Mist stable with the modern death steel at the edge of Slam Death beats which strong show that invites to propeller headbanging and stomps into the hearts of the audience, breathless circle pits that make you feel like you are just about to slaughter. The frontman Julien, who raged barefoot around the stage always in contact with the audience, which continued crowd surfing. It was a blast to see them even I show them many times, but it’s nice to have them here.
The atmosphere Black Metal from Portland, Oregon USA Pillorian.

Pretty young band the band formed in early Summer of 2016 by Stephen Parker “Maestus, ex-Arkhum”, John Haughm “ex-Agalloch”, and Trevor Matthews “Uada, ex-Infernus” with the goal to create a unique, sinister, and twisted style of dark/black metal. The atmospheric gloomy Pillorian sounds in combination with John Haughm’s throaty screams are predestined for this. The band members have grown audibly and noticeably through touring and present themselves as a stronger unit than in previous performances. Great sound very even some problem with sound technic but they still keep move. I’m not really into Black metal but this one I like mixed with some old school death metal riff and also the drumbeat

Continued with Coffins the old school Death Metal from Japan. The fiver Japanese are playing their classic heavy metal with an enormous amount of the audience, playing the most heavy metal combos of the festival on the wall. As fast as the fists in the air and the hair fly in time. Guitarist Martin Jonsson and bassist Tobias Petterson are in no way inferior to the audience in terms of propeller-banging, while frontman Oscar Carlquist – true to style with studded bracelet and chain on the leather pants – makes it clear: “We are the commanders, you are the legions! And this is heavy-metal-tyranny.
Simpler, grinding mid-tempo death metal, sometimes doom-grooving with ultralow-tuned guitars and even deeper vocal, every unique, morbid atmosphere.
Next an American Death Metal/Melodic Death Metal band from Waterford, Michigan Black Dahlia Murder. With their mix of melodic death lead and furious Metalcore,

they are the most modern Extream Metal band in this ere. with extremely catchy grooves riffs. The performance of the musicians impresses: Every raging guitar-tapping, every demanding drum-fill sounds in rarely heard precisions the guys moved on to tunes such as “Matriach” and “Nightbringers” with its many shift-changing tunes and subtle breaks, attracting even the toughest people around to bang their head from time to time and release a little steam. created a massive Circle Pit will turn up full and make for movement in front of the stage. Was strong and powerful live performance.

Deserted Fear the Death Metal from Thuringia. which combine an old-school feel with a more modern approach, and this defines their sound quite well, as these three guys grew to be pretty big in Germany with their last two full-length albums. The flamethrowers ignite in moments that were not so agreed. So the long, flowing hair of the guitarist almost captures fire. Of the technical mishaps, however, the guys can not audibly bring out of the concept. Their death lead creates a great mood in the audience, which always emphasizes how honored it is to be able to perform in such a season in front of such enthusiastic audiences, the deep growls make them completely unrecognizable. The drummer works the bass of the drums almost to death. Happy and not without having collected plenty of sympathy points, it seems like PartySan is their home turf for them.
Continued with the legend of Thrash Metal from USA Exhorde, which two successful full-lengths in the 90s, they were

view time break up. now they are here with us. In the live presentation, the classics of the two to date only albums of the group – “Slaughter in the Vatican” and “The Law” – have lost none of their power. Since they have new member they band work more solid and sound more powerful, With indomitable playfulness and tons of groove. while tunes like the religion-hating “Slaughter In The Vatican” made the crowd go crazy for the these Thrash veterans. It’s was an amazing show with full of energy on stage.
Unleashed

who do know this band one of the successes Old-school Death Metal from Sweden. They are very good and solid, with no major surprise. the die-hard fans with classics like “Into Glory Ride “And” Where No Life Dwells “as well as strong new numbers, Even “Death Metal Victory” comes across quite well, although I notice that the line between dull monotony and a catchy melody can sometimes be very narrow. Nevertheless, the appearance seems a bit old-fashioned compared to other bands even like that the crowd in front of the stage seem enjoyed the show.

Time for Brutal Death Metal from USA Dying Fetus the band has been view time has been played at Party.San. seem they are a regular guest here. even like that most of Brutal Death Metal band are always wait for this one. the band always delivered most crowded. faster riff with blast beat drum sound comes out from the from the main stage. the trio of Maryland guys how to deal with the fans which mixed old school and new school style very catchy and groovy riff it makes not the audience just stay stand. big circle pit with a continued crowd surf make the security keep busy in fron of the stage. was great setlist like “Kill Your Mother, Rape Your Dog” short but a killer song. also with new song “Wrong One To Fuck With” which heavy, fast melodic, catchy and brutal, which classic death sound. was a blast to see the performance.
Time for the headliner band, Black Metal Band from UK Venom. the band also one of the regular bands are playing at Party.San.

It’s only natural that the most suitable opening track this evening would be “Black Metal”, only to be followed by the no-less memorable “Welcome To Hell”. Dante, who usually sits behind the drum kit, is recovering from an injury and replacing him was Karlos Bareham. The veterans of old Thrash/Black have continued with pretty much every other well-known song in their rooster, like “Buried Alive”, “The Evil One”, and they even finished with a sweet encores that included the mighty “In League With Satan” and “Witching Hour”, which in my opinion is the best Venom song. Great show but there lest action from the audience.

Not realizing how fast time is running away, they’re still one day more keep safe the energy for tomorrow coz tomorrow will gonna big day which great band is playing.