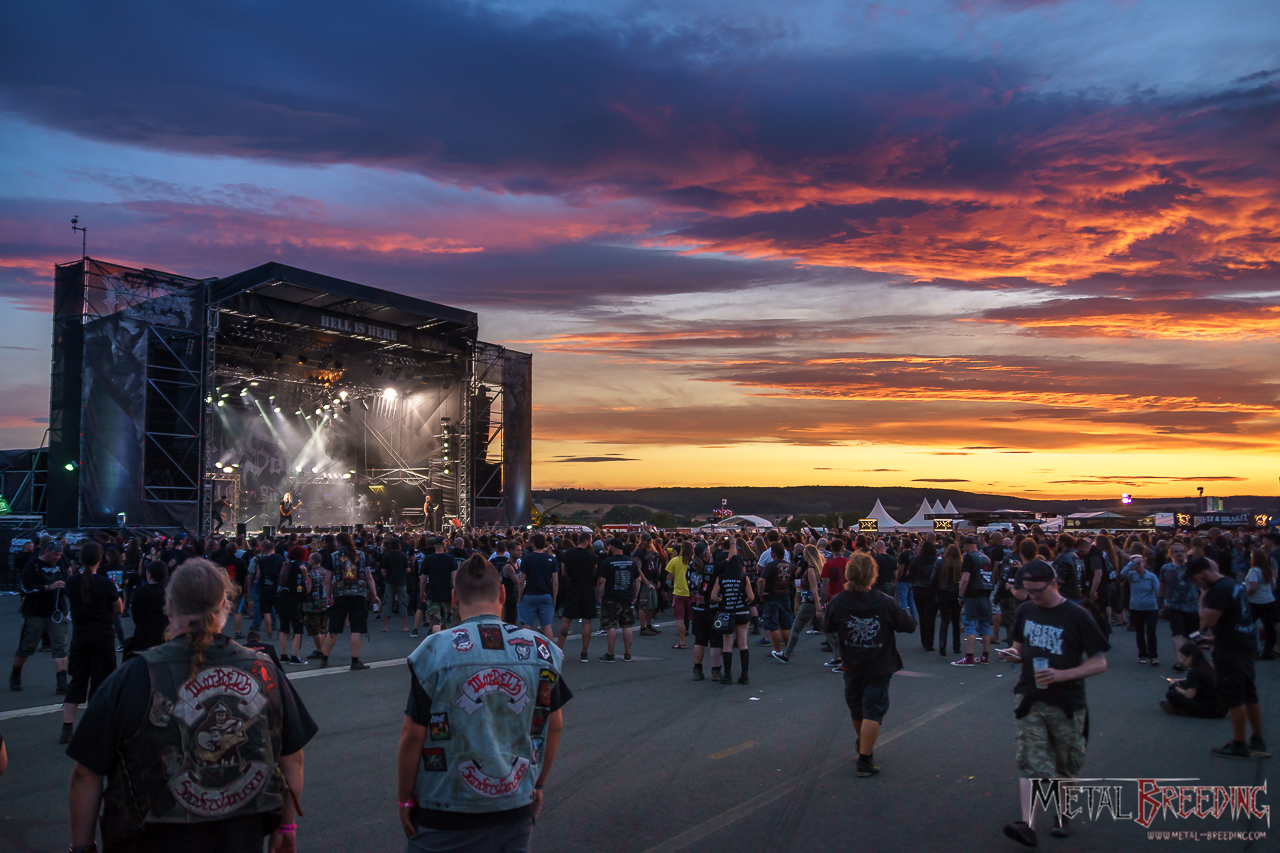 Finally, we arrive in early noon after a long drive, so crowed at the moment at the Gate to entering the camping ground, finally after 30 minutes we are here “Welcome To Hell”. Look like a very busy at the camping ground most of Visitor still builds own Tent as like us. After we are done builds our Tent start to exploring and visiting some friends get some nice Germany Biers while waiting the first band is entering at the Mainstage.
The weather is great which the Sun is shining, it’s seem gonna be a good start for the first-day experience at the Airstrip, around 2.30 PM come big exploding sound from Mainstage it means the party will begin.
As the first Band from Salzburg, Austria will be entering the Main stage, Our survival depends on the Us. Great

atmosphere of Decoration, Fox head, antlers, bones and branches, they play their very Melodically and powerfully mixed with atmospheric Black Doom metal. Unfortunately, it brings your mind into nature atmospheric. After couples of the song there some problems with the sound, but the sound was getting under control. Was great opener band I was enjoying the show.
Gruesome

hit the main stage the second band Death Metal from the USA Explicitly asserted as a tribute to the legacy of Death the multi-state death metal project Gruesome was born out of guitarist/vocalist Matt Harvey and drummer Gus Rios’While playing classic Death. They played a great show that was truly worthy of praise and delighted the fans, as evidenced by the number of a metalhead in front of the stage. a truly great tribute band, not only authentically connected to the Chuck heritage but more than living up to it.
The old Black Death Band from Sweden, Unanimated which influenced melodic Death Metal.

Brought life in 1988 with released two Album before disbanding in mid-1996: In TheForest Of The Dreaming Dead1993 and Ancient God Of Evil 1995. So expect nothing but evilness, blasphemy, and darkness clad in wicked riffs, haunting melodies, and grimmest vocals, in between classic Dissection and At the Gates very classic sound. The twin guitars to have an awesome cutting edge unheard in many melodic. Great performance which large audience in the early day of the first day.

Dead Congregation next comes up onto Main Stage the, Death metal band from Greece. Present themselves in perfect harmony and dynamics and technique but also with a sense for songwriting through their set. Not longer than half set to come up the deep black storm clouds it getting more and more which following by wind blowing harder and harder seem a big Storm will come soon after view second come warning alarm telling to all visitors that they should leave the festival ground immediately. It was chaos at the time everything flying in the sky, in 20 minutes the storm destroyer all around the festival area which a lot of tents are broken. Thankfully, no one is injured. It was all so scary.
After the Storm is gone the situation come back normal, which continues with Anaal Nathrakh

Continues with American classic of the Thrash Metal band Toxic Holocaust. The US boys from Portland convinced with their punk influences and fast-paced songs with their powerful thrash metal. mood, the fans were in their spell and made for the first crowd surfers with songs like ‘Wild Dogs’, ‘Nuke the Cross’, Reaper’S Grave or ‘War is Hell’. Their raw energy with simple riffs, but very aggressive war great show and a lot of fun to see them all along the performance.
Time for the Canadian the Black Death Metal band Revenge.

The trio with the unreadable logo is certainly not for everyone.“ Us And Them” opened the mighty setlist, whereas right after it, came “Traitor Crucifixion” when James and Chris alternating and trading some of the vocals between them to create a massive wall of anger and fear. The band continued to alternate between older and newer material, hate-filled Noise Black Metal that is hard to beat for hatred, anger, and destruction. The greatest appearance of the evening follows now.
Because of the Sandstorm in the early noon, it makes the schedule is delayed for an hour, usually right now Master’s Hammer will enter the main stage, but the schedule is the changes which the legend of Black Metal from Norwegian is singing on the main stage, Emperor. One of the biggest Black Metal was known as one of the most infamous Norwegian black metal bands during the early and

mid-1990s, which regarded as highly influential by critics and emerging Black Metal. The band played as well as they are a good show. But as typical of Black Metal with a certain distance to the audience. A variable light show also enchanted the eye. Especially pleasing that other colors are used except red and fog. The fans celebrated the band and thanked it with applause and the headbang. Was good to see them here at PartySan, for me they are nothing special but, they are  really good at music technic.

The last band for the first day of Party.Sun 2018 Master’s Hammer the Czech Republic Black Metal, Experimental. They have experimented with electronic sounds or an Avant garden Metal which incorporate with Symphonic Metal. They celebrate with all their experience and stage presence Great melodies meet a sovereign performance and distinctive rough voice interweaves with the heavy sound instrumental work to a mystical ritual which impression of being more into a black metal opera. Seem most of the audience are enjoying the show even that not my music style, but it still funs hanging out with a couple of friends while watching till the end of the show.
Well, it was an awesome day and a lot of experience for the first day of Party.San 2018. Before we hit back to the camping site, we when into the Party Tent, listening to some metal Dj, where most Visitors hang out after the show. Looking forward what the new experience for the next day.