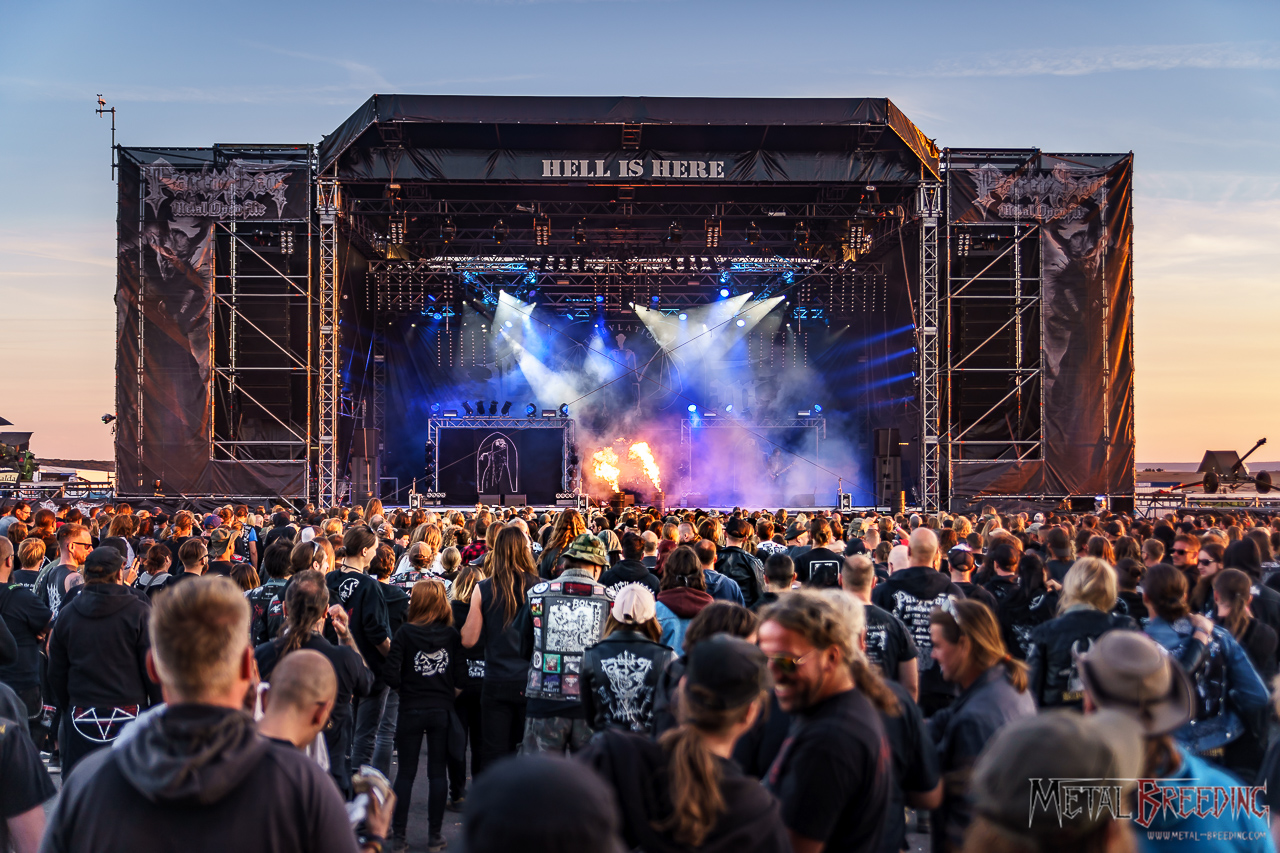 Saturday seems today are gonna be nice weather, a bit cold that yesterday but as long as the sun is shining everything are okay. one a glass of water and coffee that already make me wake up. Before the party is starting better to get some food and prepare some stuff. After breakfast went to Metal Mark and visiting some friends.

Today it will begin with goregrind mix of grindcore band from Sweden, Razorrape. The bands are good to entertain know how to handle with the audience for the early noon. which big circle pit continued in from the stage seems they have enjoyed the show most of the wearing unique costumes and holding toilet brush bubble pistols. They combine some more groovy elements with fat Guitar sound and the fact that the dual vocals (one by Martin, founder of the band, who also bangs the drums like they’re his slave) are making this sound even sicker than what it is. Putting these guys up as an opener for Saturday was apparently a good decision. Great show and There is a good mood preprogrammed.
A view minutes break and continued with the Swedish classic heavy rock, blues, and psychedelia band, Graveyard.

Seem to have fallen out of time with their powerful retro blues rock. Show up visually and acoustically like a rock band from the late 60s. Served as a main course solid Death Metal with Doomigen guitar parts, which often drift off into the melodic. was quite crowded at the time. it was enjoyed to see the show while drinking my Caffe.

Next continued with a Finnish Melodic Death Metal Wolfheart. the formed in 2013 by Tuomas Saukkonen as solo project band. sound self-proclaimed as winter metal, which aggressive and full of energy mixed with acoustic and fragile, harsh black/death metal or atmospheric doom, very great full show even that was not kind the music I like.
Harakiri For The Sky the Post Black Metallers from Austria,

they have gained quite some popularity and it showed looking at the amounts of people that came to watch them, in my opinion, they are more into Melodic Death Metal that Black metal or post-Black metal which much more riff traditional of Death Metal in every song, great live performance full of emotion from the stage.

Move into Speed Metal from Canada Exciter. They are widely considered to be one of the first speed metal bands and a seminal influence of the Thrash Metal genre. Although I am not familiar with the classics of the Canadian trio, seem was not a lucky show for them, there had some technical issue, sound awry and creepy. The trio cast on the stage relentlessly reveals their disadvantages: The guitar solos create gaps in the sound that no rhythm guitarist is able to fill. On top of that, the excessive instrumental gnomes between the songs are just annoying over time. it can bee happen that the band some time in the moot to play and sometimes not.
Sadistic Intent is a death metal band formed in 1987 in Los Angeles, California. They were one of

the pioneering classic death metal acts in the area, they are one of the cult bands in the underground. With their brute power on stage, they also prove where they have this reputation. Energetic and active, like a cross between old Morbid Angel and Unleashed, the sound pleasure is clouded by the refreshing wind again and again. The Americans from LA simply tear the audience along and positive surprise.

Next time for the NetherlandsDeath Metal Band Pestilence. They are has been view time break up in 2016 they reunited once again. In the beginning, they are a Thrash Metal band Later they became a death metal band and incorporated more jazz and fusion influences in their music. I have been following the band since I know Metal Music but never see them in live performance now finally there they are standing at mainstage ready to make some noise. which precise tempo changes and nimble, downright evil-sounding, minor-key guitar work would help pave its ascent into the nether regions of death metal. very technical with mix old school and new school refs and very heavy. great and powerful live performance wich good reaction of the fans in front of the stage.

Tribulation, The Swedish Heavy Metal, Black Metal, Psychedelic Rock, and Gothic Rock. In the beginning, they are known as Death Metal. This was the third time they are playing at Party.San. Catchy Heavy Metal sound come out from the mainstage which great full appearance on the stage especially of the Guitarist Jonathan Hultén, he never stands always move and dances in ecstasy across the stage. This is downright cinematic. Progressive guitars mingle with heavy death and black metal sounds, even that not my music style but just respect how they acting on the stage it was an amazing live show.

Brujeria, the Grindcore band from Mexico, a bunch of crazy Mexicans who decided one day to do some of the craziest music which the theme of Cocaine, life, death, sex, political situations. Pretty much every hard subject you can think about, the music is an awesome, groovy kind of Death Metal that dabs into the realms of Grindcore for some great moments, and tracks as aggressive as “Colas De Rata” are just instant moshpit activators, whereas always communicate with the crowd is at its peak in this kind of gig, even making a few thousand people yell “Fuck Trump”, before the bass-layered “Viva Presidente Trump” before the next track are play, trying to make a joke story with Spanish language even most of the audience has no idea what they’re speaking about. With the small gestures, the movements, and the music tell the story almost as good as words. These know how to keep the audience happy.

Continued with Thrash Metal From Frankfurt am Main, Germany, Tankard. Most Metal fans know them, one of the old band from Germany long with Along with Kreator, Destruction, and Sodom, which always full of energy in every live show. The singer always keeps moving from the right to the left always try to keep contact with the audience. It was a good combination of Germany band play in front of the Germany Audience. Party San knows this because bands like Tankard and Kreator keep coming back to the festival, with good reason. The show they played was great as always and I was happy they involved some fire into the show because it was getting really cold on the festival field.

Watain, i don’t know what I should say about them, just leave after taking view photos of them, I have been often seeing them in another festival and also the music what they play it not get me in touch.

Party.San, always great to be here which great festival atmosphere, it was not realized that the time running so faster 3 days fell like it was yesterday the festival begins. Look forward to the next edition of Party.San 2019! see you next year.