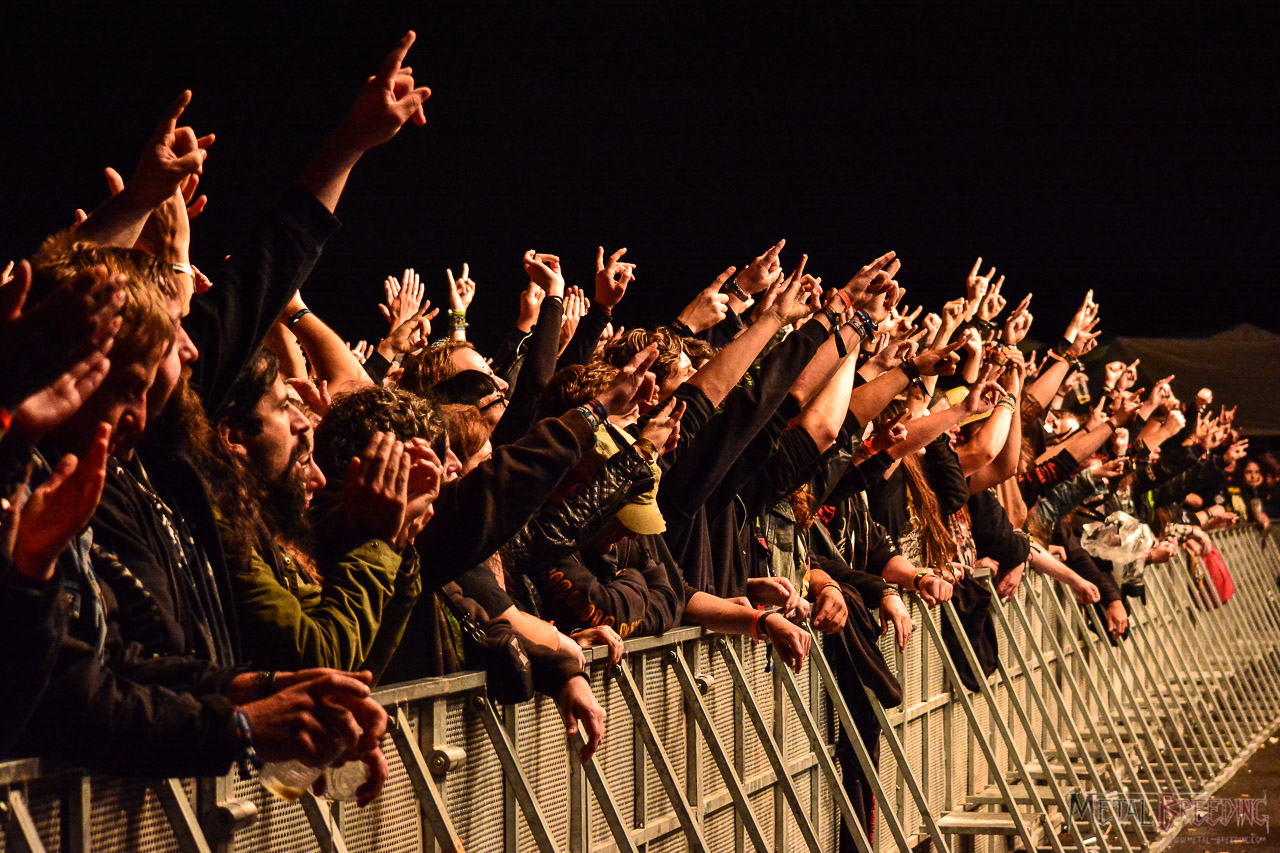 Still a bit hangover from the party at party tent. just hope today the weather getting better but it as same as like yesterday, windy and cold. Time still keep moving time for us get some breakfast, at Party.San there some viewpoint you can get some breakfast with a great price. after breakfast fast back to our tent joint sitting with some another's friends and prepare stuff.

Strong wind and cold but there at mainstage already full of audience wait the opener band Spasm, Grindcore band from the Czech Republic. for the open band, it was large numbers of the visitor at festival grounds to watch the performance. What am I supposed to say ... which green color of borat string swimsuit and white Pe......is masker which curve body come out from backstage ready to starting the party. Down of mainstage there are large of circle pit are started which forming a colorful, full of Confetti fly in the air and massive soap bubbles and a freak, that was a lot of fun to see them, great performance and awesome party even they play only 30 minutes .
Following by next band Isvind, Norway Black Metal, which black and white masker painting of the face four of

them look like Devil looking, after the Demo album at 1992-1995 finally they make the first full-length album "Dark Waters Stir" was released in 1996. after many gig tour they had done, now they stand in from us on the mainstage of Party.san.thus providing for tightly crowded series in front of the stage. great voice comes out from the short guys which catchy riff tightly performed.
After break in view minutes time forRussia Brutal Death Metal hit the mainstage Katalepsy, the band was formed in 2003 in Moscow, when you don't familiar about Brutal Slamming Death Metal you are probably

asking yourself and. which Technical Death metal, bursts through come out from the speakers in a flurry of blasts, riffs, sludgy bass and groovy in a way that easily channels and matches the ferocity of their contemporaries several like brutal death band Krisiun, Suffocation, and Vital Remains, with modern sound has an undeniable knack for crafting infectious and brutal riffs and ideas also had variation vocal Technic not only fabulous growls in the repertoire but also some violent screams with partial black-metal. They bring more crowd give some more energy for the audience.

Goatwhore is an American extreme metal band formed in 1997 in New Orleans, around 20 years they are on the root has been six albums bring out, now they are a stand in from of us. a great full performance with a mixing of Black and Thrash Metal , even the weather are not so friendly but they can make all audience getting warm.
Continues by a Swedish hardcore punk Wolfbrigade.

have created a very own drawer since 21 years. Their last release has already been 4 years ago, interesting band With aggressive rhythms and pressed vocals, combining elements of punk, death metal, and hardcore.The band’s influence stretches across many niches and it’s not uncommon to see leading death metal, crust, and punk bands site Wolfbrigade as a primary influence. a great stage performance.

After view, minutes break time for Technical Death Metal from Germany Obscura. The band became prominent when members of Necrophagist and Pestilence joined.While the rain finally subsides, their massive audience is waiting for there. great live performance but there miss something on the music composition like groovy part, break down part it like water following the river, not statics. I have bee show them view time in some another open air festival.

The Black Death Metal from Switzerland Bölzer.The band have released three EPs, and released their debut full-length album Hero on November 25, 2016.Gives you the feeling of tasting a very heavy slow deep in the dark, sprinkled with sludgy post-metal atmospherics. there only 2 guys on the stage but they create such think great sound with full of emotion and powerful performance.
Angelcorpse

the Blackened Death Metal from Kansas, US. they were formed at 1995 and was active during the 90's and forward after several years break out finally the back again after they found a new drummer. high paced Death Metal with ingredients from the black metal genre, the vocals are based on growls with a raspy sound and the guitars are fast, quite technical and pretty brutal, it makes me remember a well-known death-metal band called Morbid Angel.
The early evening which color full of stage light come out in some time there stand 4 guys ready destroy the stage the Black metal, death metal, thrash metal from Australia,

Deströyer 666. the band formed in 1994 in Melbourne by Frontman K. K. Warslut. a view second the song Wildfire is played suddenly there come big fireball from in front of the stage it makes the frontman K.K Warslut get shocked and said "Faking hell". the 4 Australian guys were great live show bring most of the audience are a cheery along the show.
The Bavarians German folk metal band Equilibrium, play back in the memory and have also brought along a

new album called "Armageddon". Formerly very popular in Folk & Pagan Metal, the new material seems much harder and less playful. After the intro, the first fireballs are released with 'Apocalypse' even there without the old bassist player it seems not much different. The combines elements of folk music, black metal and symphonic metal with various other influences,Their riffs reflect traditional Germanic melodies which lyrical themes focus on Germanic tales and Germanic mythology.

Time still keep moving, already late evening more than half of the open air is already it means almost at the end of the event on Fridays. Still full of the audience in front of mainstage are waiting the third last band of the day is on the stage Dying Fetus, the trio Technical Brutal Death Metal From US. since the first album until the last album i have been following this band and view time show them live performance in some another event also they have been playing at Party.San open air 2010 and 2013, never get tired of seeing them life performance. which always by characterized blast beats drummer, catchy and groovy slam riffs and heavy breakdowns. around 45-minute live performance, Is like a blow in the face.
Then continue with Exodus,

Since the early 80s, they have been an institution in Thrash Metal, which they have justified and a living legend that has earned itself a great deal.Such a good live performance and great to see them again at Party.San open air, even i show them 3 weeks ago at Metaldays but you can't be missed them, The troop is bursting with energy with old school riffs, always trying to keep the audience uninterrupted.
late of evening there still a lot of audience are stay around, hang out in some place or find some food and drink beer while wait the Headliner, a view minutes break and also the sound check are done now time for Death metal from England Carcass hit the main stage for the last band of Party.san on Friday. Unfortunately, i have seemed them quite a lot also at Party.san open air 2013. but this evening there some think missing like energy like the light, not enough watt come inside, or lest mood to play, but even like that was g

lad to show them again at Party.San this evening.
The second day of Party.San already done how quick the time run away , as like usually the party still keep going at Party tent, whicht great Dj with many kinds of music genre are playing, and also great time to meet up with some friends sting on the ground of party tent drink beers while hearing the music..