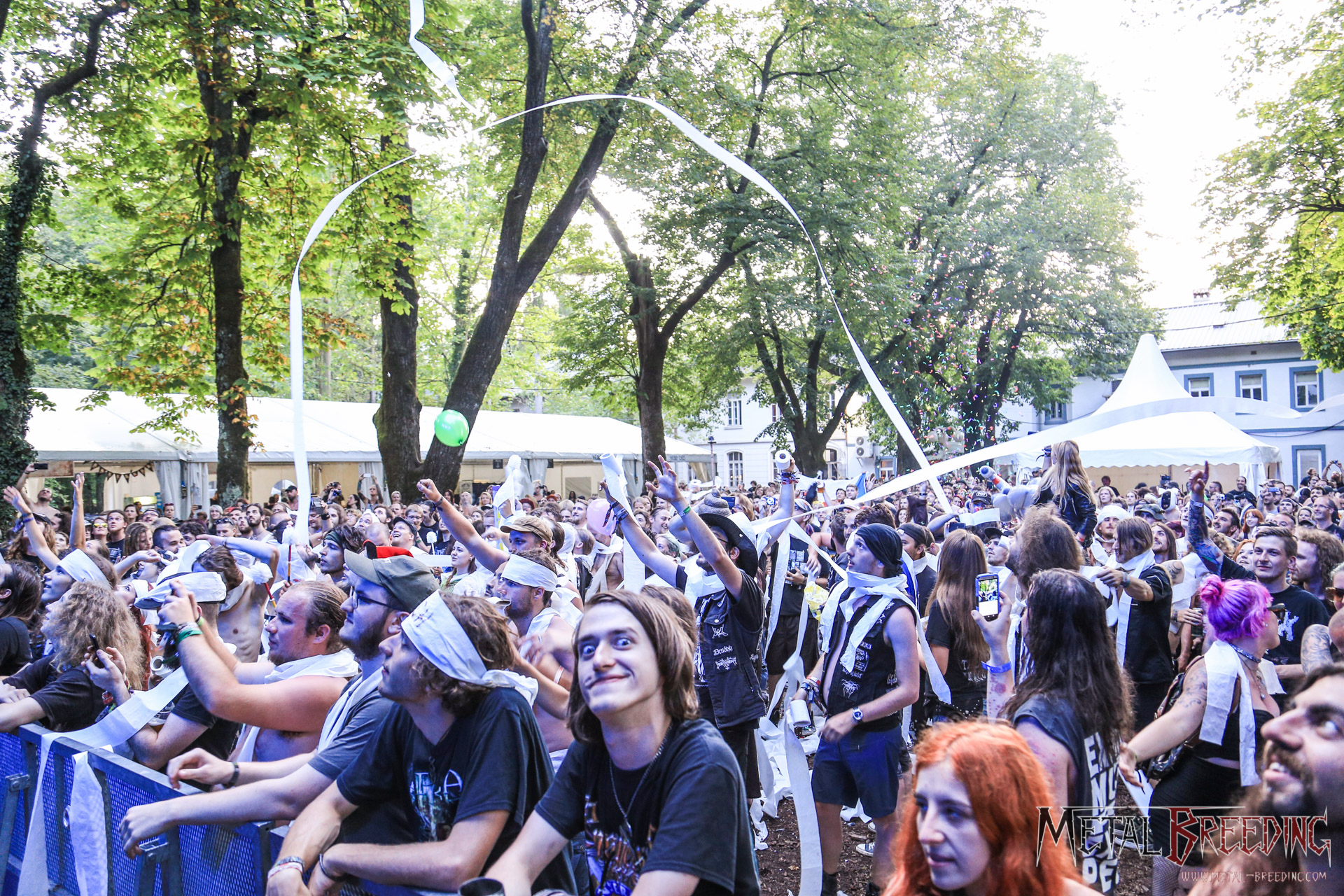 I cant belife today are the last of Metaldays, it always happen in every Festival time always short. before the fsit play at mind stage we went to walking around the Tolmin town and get some chill out at Soca river for the last day. finaly today are gonna be great weather not as 4 days always rain every afternoon till 2 time my tent are blow up, lucky that i can still survives sleep in my broken Tent.

The opener band for the last day of Metaldays, Retrace My Fragments the progressive and experimental Death Metal Band from Luxembourg. very catchy rhythm which modern sound guitar, they are more metalcore which Death Metal and Thrash Metal influences. as like usualy there not much audience in main stage graund but was great to see live performance from them.

Short breat and come next band Dead Label from Celbridge Ireland, Groovy and catchy rhythm, Although they take influences from all types of metal their overall sound is heavily influenced, like Machine Head, Pantera, Slipknot, caliban. but there you can hear they get more influence from Machine Head, especially the vocal character and some guitar reffs, which modern sound. even on that time was not so crowd but there view of metal fans they still anjoying the show with small circles pit.

Heavy metal from France, Nightmare, combine their classic heavy / power metal roots with some contemporary elements.At the begining they play Punk Rock, as the bands music evolved to Heavy Metal.The band broke up in 1988, and then returned in 1999 and now play Power Metal.
A Heavy Metal from Lativ Skyforger which remains of doom metal band

Grindmaster Dead. from the outfit or the costum what they are wearing you make knowed that ye play Volk metal which most of the song are Pagan and Gods. the Music queit intresting, there mix a view kind element, doom and Black Metal also very melodic. great performance and was crowed.

Around 5:30 pm the sun still shining perfect afternoon with great time for listening some great music. there on main stage 5 guys with masking ready to the show bening Varg, the Melodic Death/Black Metal/Metalcore from Coburg, Bavaria Germany. great band which very melodius great riffs guitar whit barking vocal mixt with growl backing , great drummer. The band stands on anti-fascist and anti-racist positions and denies any political ideologies in music. great show most audience are ajoying which most of them are headbang continually.

The Viking Metal from Norway, Einherjer.they are heavily folk influenced and Viking with a Dark mystical, while others have a more traditional symphonic black metal sound. the first band are incorporate Norse Mythology in Metal and one of the founders of the Viking Metal genre. great weather and rigth time for the audience get some relax drink beer wheil see the show.
Time for all Thrash metal fans are join in the main stage of Metalday there larged crowde of the audience entering the the main stage ground. after soundcheck is done there the California Thrash Metal, Exodus already to destroyer. the band formed in 1979 which heavily influenced by

Motörhead and New Wave of British Heavy Metal bands like Iron Maiden andRaven.whose lessons they combined with the raw, D.I.Y. aesthetic of theprolific Bay Area punk scene to create thrash metal. was great perfomance specialy the singer Steven Souza he never stay in in on place always run into right and left try get draw the attention of the audience.
Germany Power Metal Blind Guardian,the atmosphere grew more and more jovial, was very crowded, the lights were low which full of fog at mainstage, there see all the audience cant wait the show are begin. Usualy im not fant of power metal but i can said that they are great live performance. the played a great balance of classic and contemporary Guardian tunes, and it all sounded fantastic despite the venue’s notorious muddy sound quality.

The headline on fifth day the Power Metal from London UK, Dragonforce, at the beginning this band name was DragonHeart, founded in 1999 by guitarists Herman Li. usualy im not the fan of them but i just want to the live performace and see about the trick of Herman Li the guitarist. seem they are somethink problem with soundcheck , already more that half and hour but there no sound on the stage and also all the audience was cant wait when the show are begin, finaly the guitarist Herman Li come out stand in fron of the stage and telling that the singer Marc Hudson had some personal issue cant come with them, seem all audience was disappoint when about that but another way they still come and join with us at the last evening of Metalday, covered with some editional singer from Norway his name Marc Pellek who just 2 day to learned the song of Dragonforce and before he was joint in some auditions for the post of Dragonforce vocalist. time are runing away time for them for the show are begin with the first song Cry Thunder every ernergytic they bofh of guitaris they always chang the place move let side and do some solo in fron the stage, great musician great performance but the edition singer he cant sing all song of Dragonforce , they play only 6 tracks and they show are the end.

In my point Metaldays are brending as holliday and Metal Festival all in one is pretty accrate.since 5 days we have been around, there see all of metal fans are relax anjoyed the beautifull natural soca beach, in anothere side they are having fun of metal festival, not even that the festival also has to offer some program from Hiking, Paragliding,. not wunder most of the Metaldays visitor will come back next year and each year to come as long as it's more of a metal holidays than a regular festival.

it was realy amazing time which Five days of intensive heavy metal culture and see all activity around. Meet new face and hang out with friends at Soca river see the band performance in all 5 days. Even rein but most time but we had alot of fun all along the Festival.

Thanks so much for all Metal days day Team, see you next year Metaldays 2017.