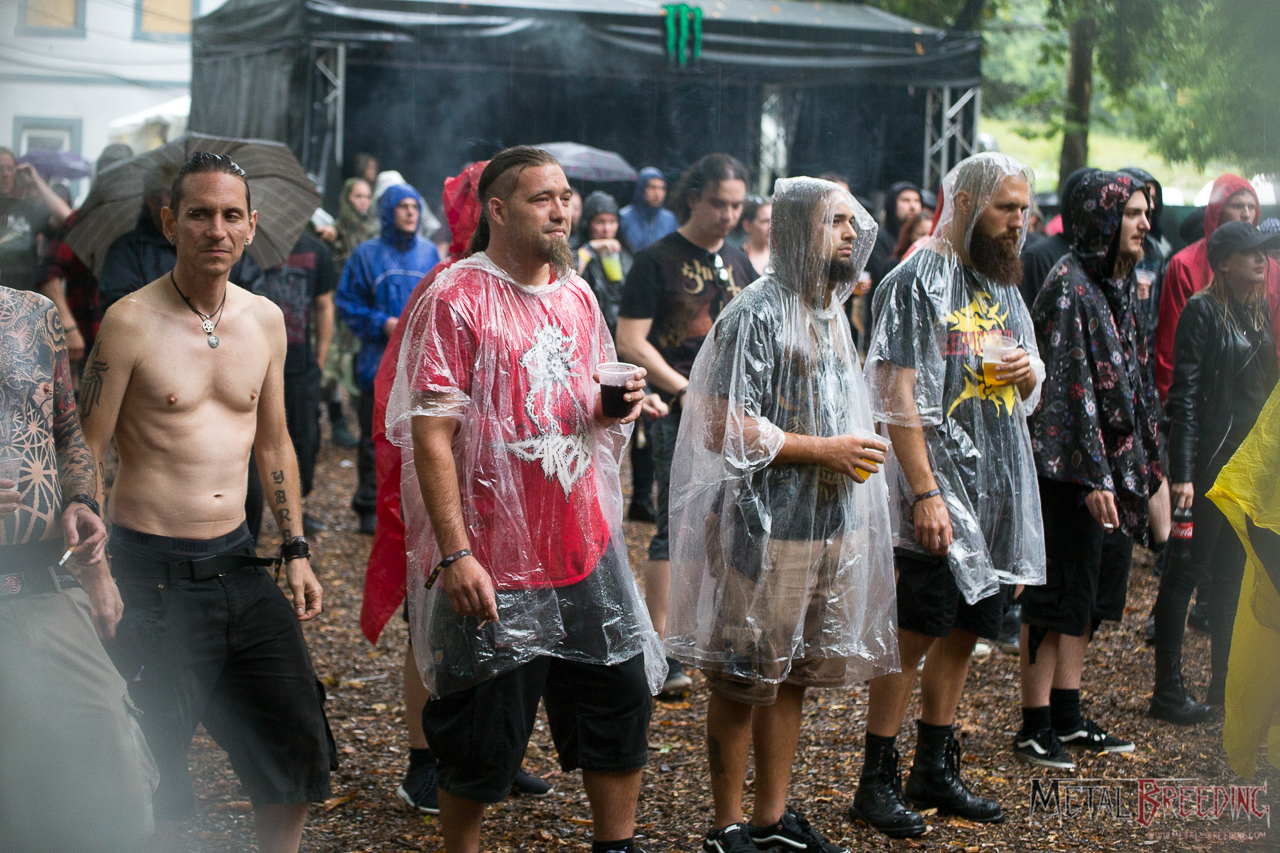 Once again this year one of the most fascinating metal events in Europe, the Metaldays Open Air, how great to be here again joined with all most of extreme Metal fans around the world, which gratefully festival venue in the Planet which surrounded of the mountain and the turquoise Soca River where most of the metal fans hang out relax enjoyed the beautiful nature and landscape.

After long way which through two countries Austria and Italy with rain Storms and warm that is the symbol of the epic journey bring as to the beautiful country of Slovenia. when we arrive in Tolmin town it was great to see full of Metal fans walking, shopping around Tolmin town. after we did finish building our camping tent we went to river beach joined with our friends, enjoyed our time relaxing and before we starting work on the next day of Metaldays.

This year has a bit change and also some new as last year of Metalday. the new is, there is the third stage the New Force stage for a new band for the first time at Metalday. This year the more new band are playing not even on New Forces Stage also in (Second Boško Bursać) and more band line up playing on the Second stage that the main stage called (Lemmy Kilmister Stage) on the main stage most the biggest bands the headliners. The main stage started 4 PM in afternoon and the second stage started at 2 pm. Most band schedules are overlap between the main stage, second stage, and new Force stage. At the New Forces stage started since Friday until the next weeks Friday at Mein Stage (Lemmy Kilmister Stage) and second stage (Second Boško Bursać) the first band will play from Monday until Friday.

Monday the first day is the horrible day’s thunder, windy raining, it makes impossible to go out from the tent. just lucky that my tent was in the corner which not so much win come blow up at the time I was thought that my tent will be flying away. Because of the storm that struck, there have been changes in the environment and also that the New Forces Stage completely destroyed it make not able a band is playing on Monday, it was 5 Bands canceled because it makes not possible to performance.

After getting some Breakfast we ready to go to the second stage ( Boško Bursać) ground even weathers still not friendly still win and cloudy but it better than rain and thunder. At 2 pm on the Second stage there the first Heavy Metal band from Germany

Reverend Hound. Ready to destroy the stage. Five Munich guys ready show up to the audience to make warm up which old school Heavy metal mix of thrash metal with great heavy classic riffs, melodies and high and clear voice. the band was quite long in the metal scene, founded in 2004 with under name Savage after view time changes the line up of the member band until they decide changes band name from Savage become Reverend Hound. Reverend Hound name was taken from some a game “Fallout 3”. angry and aggressive performance it makes cooling up more audience come to join with at the second stage.

Only 15 minutes break, time for the next band enter the Second (Boško Bursać) the punk/death metal (death-roll) from Slovenia

Hellcrawler. the band had most local audience support to keep crowded going on, with heavy stoner atmosphere riffage, dirty sound, growling vocal and there a lot of old-school death metal element great song composition, that make the right time to warm-up the audience and started to build some circle pit. they never thought that was crowded at second stage ground they are just realized that come to the end of the set.

was big rain come down that was not be able to see them. seem rain stops, Just hurry up catching the next band from the Northern Ireland, the Death/Doom Metal, The Crawling. The trio guys can reach more audience to into Boško Bursać, which many different elements sound kind like Paradise lost, Bolt Thrower and Katatonia. from clean guitar sound until the heavy sound, slow down break which mix with a guttural vocal to combine melancholy with weight, that makes blow you up into another world.

Finally, the first band will be hit the Main stage (Lemmy Kilmister Stage) Na Cruithne was getting ready to rock as opener band of Metaldays main stage. The Irish folk band, after a couple of set lists, are playing set list on the sky come closer following windy and start raining and the weather getting worse it makes they had to stop the show a black drop in front of the main stage are close to half an hour to protect all equipment.

Just hope the rain stops before Brutal Death metal band from Malta, Beheaded hit the second stage but looks like the rain not gonna be stops. that band I just waiting for and just lucky some friend are borrowing me the raincoat and Camera protect to cover my Camera from the rain. quickly running to the second stage just lucky they just started to play, was crowded never thought about. was great to see them live, was great live performance, it was fit together with the weather because the sound comes out from the stage like Thousands of rain stones and it never stops really brutal with the groovy heavy riff and faster with blast speed drummer mix with guttural and grow vocals it makes perfect sound. usually, they are not allowed to play because of the bad weather, but they said we still play they will not make disappointed of them fans but after view song the weather more bad until the rain come inside of the stage it was impossible to keep continue the show.

while the show at the (Boško Bursać stage) continued as soon as the worst of the rain has passed. finally, the rain stops time to prepare the stuff and move to Boško Bursać stage at the time the Thrash metal Suicidal Angels from Greek already stand on the stage following the audience come over it make the crowded react well. the four of Greek guys was full of energy, the band obviously inspired by the likes of Slayer you make he ar from the riffs also from the composition of the song. crowd moving and moshing in the mud. a great performance they mix the set list from the old song and the new song was promoted their latest release album.

we just passed to see Loudness at the main stage. time is still keep move on never realize soon will be the next band gonna hit the main stage, at the moment was so crowded at main stage ground wait for the Florida heavy metal band, finally, Iced Earth hit the stage. I have been seem them a couple of time before. Heavy Metal mixed with Thrash and Power Metal. a live performance was very good, Singer Stu Block has a strong expressive voice that fits wonderfully into the music style. it was a pleasure to w

atching them at the Stage.

Over at the Lemmy stage, the crowds have amassed, waiting for Marilyn Manson to come out behind the black veil obscuring the stage. after took so long preparing stuff and sound check at the main stage. I have been seeming Marilyn Monson live performance one time, I can’t say that music that I want to listen. he also doesn’t allow all photographer enter the photo pit only some view of the photographer can enter the photo pit. I just watching only the first song while trying to get some photo of him. the performance does not manage to grab me Fairly. not only that Manson was cut the show about 20 minutes short, who are big fans of him was disappointed.

Finally, we are done for today, even at second stage will one more band will play Venom inc. but we are too lazy and has a lot to do with out tent after 3 time Storm, windy and rain just hope our tent still there.