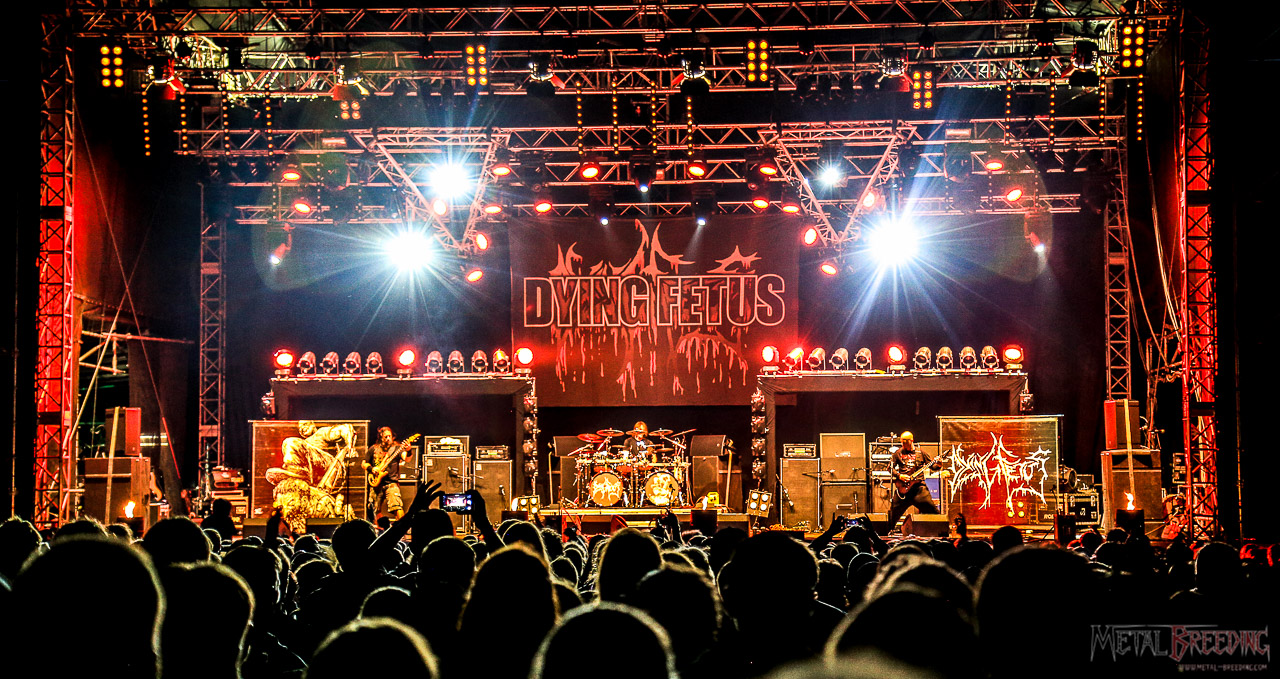 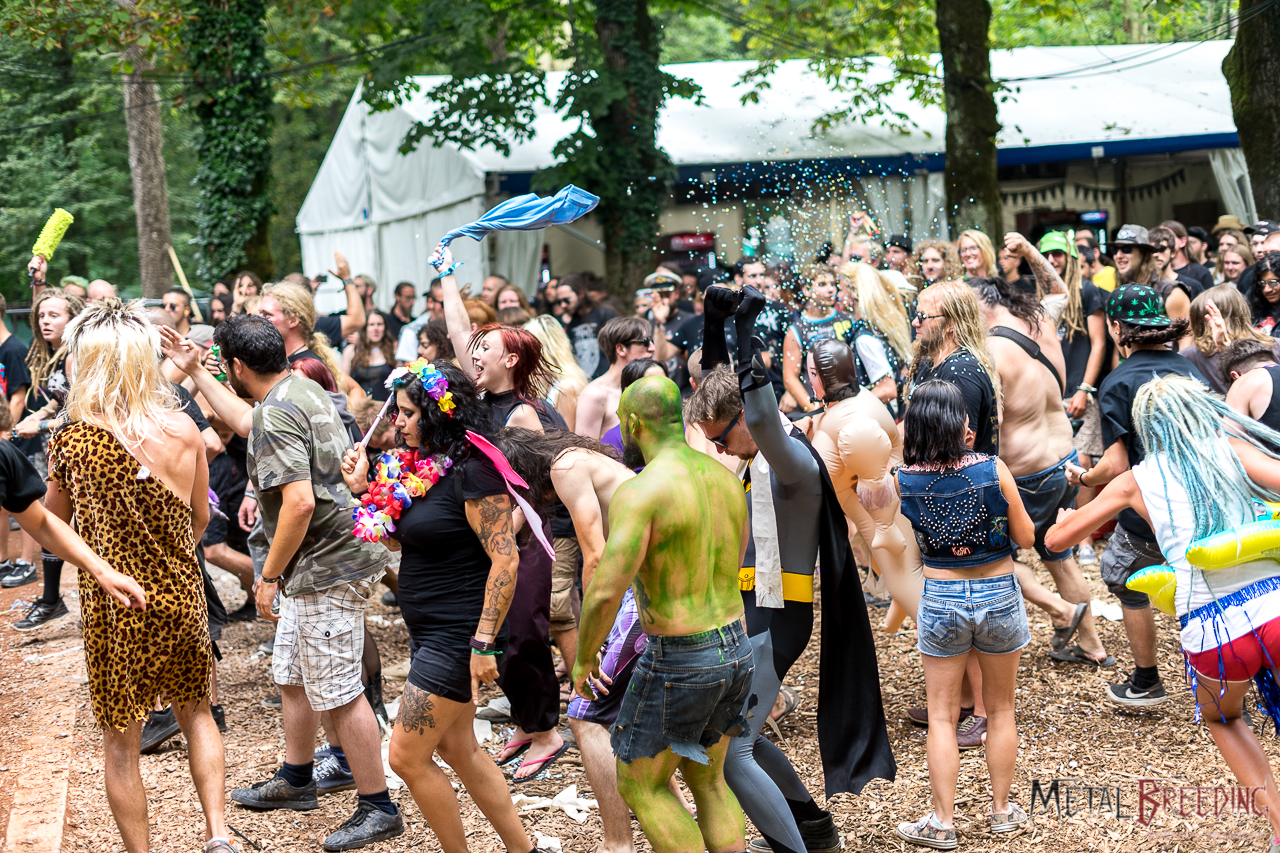 After long sleep even still tired but it makes not possible to get some more sleep because the sunlight through into my tent it was warm. another side was great to get some fresh air in the morning while enjoying to see the amazing view from our camping ground. time to get shower and breakfast before leaving the camping ground.
Before moving to stage ground we went to beach ground because only that place is still alive. Like, as usual, there is a lot of activity you can do like yoga sports drawing or get some relax to see the nice Soca river view.

From Beach ground, we move to Second stage (Boško Bursać Stage) with Gust the Hardcore punk band from Trollhättan, Sweden. The opening band on the fourth day of Metaldays. The unique style of mixes crust rhythmics with hardcore verve without the result sounding somehow dully. 30 minute long was great enough to get us wake up a great band to warm up in the early noon.

Continued with the second band the Post-apocalyptic Heavy Metal from Norwegian Chontaraz. The band inspired by the aggression of Dimmu Borgir, the compelling elements of Rammstein and the epic elements of Sabaton. Epic metal meets modern riffing, gruff vocals go hand in hand with excellent cleans and a heavy, dark atmosphere is accentuated by some great melodies. even there were not so many people are joined.
Time to get some food and of course Beers before we moving to the main stage to see the opening band.

Nemost French melodic death metal. The band was formed in 2005 by bringing out two albums. simple and catchy riffs mixed with some black metal element. Technicality and melody coupled with the raw death metal aggression. seem all the audience enjoys full keep staying with them until the end the show.

Cobra and the Lotus Heavy Metal from Canada. The band formed in 2009 by singer “Kobra Paige”, the drummer is the only other member who has been a part of the band from the beginning. The band sound kind like modern power metal for a power metal crowd. The band demonstrates its power metal credentials with slick. They promoted their recent release “Prevail I”, the first of two to come out this year. During the show, they are always in contact with the audience and the audience also sing along with them together. They are good both in terms of music and stage performances.

Move to the New Forces Stage before we reach the second stage to pursue Melodic Death Metal from Niederrhein, Bettlesword from Germany. It was pretty much a crowd at that time at the New Forces Stage waiting for the show to start. The band was formed in 1999 and has already issued out two Demos and two full albums. in their show is very good, they can make the audience entertained and survive until the end of the show. was a blast to see them.
Quickly back to the second stage to joined see the Goregrind band from

Netherland Goregrind Rectal Smegma. Formed in 2003 under the name Carnal Rancidity, One of the most successful goregrind in the extream metal scene has been out on the road to South Europe with Rompeprop and once through central Europe with Cliteater and Rompeprop on the Goregrind over Europe tour. The band very entertaining time for the audience to get party time before the show is begin was already crowded at second stage which a lot kind of unique outfit with a lot of stuff is flying in the air. The big circle pit is begun following with continued crowd surf was total chaos at the moment at second stage ground.

Back to the main stage there six guys from Andorra Spain the Progressive Death Metal band Persefone ready begin the show, The band’s name is derived from Persephone, a figure in Greek Mythology, the band was formed in 2001. THe band sound kind like deeply influenced by the ’90s melodeath, progressive black and prog scenes including. Great singer always moves into right and left the stage by the second song he went down the stage meet the face to face with the audience. was tight, precise and energetic performance.
Back to the second stage to see an Australian Deathcore band from Brisbane, which was founded in 2010

Aversions Crown. They weave the cool parts of Deathcore into an interestingly atmospheric form of melodic Death Metal which influenced by a lot of modern and classic death metal bands. Groovy with The atmospheric undertones with those soaring breakdowns and heavy modern sound which faster double bass drum mix with blast speed beats completely great mixed.

Next is Raven English heavy metal band associated with the new wave of British heavy metal movement. The band was formed in 1975 in Newcastle, England, by brothers John and Mark Gallagher, and Paul Bowden. The band’s highly energized live show and interaction between band members developed a unique image and style of play. with youthful energy and move which switching place between the guitar and bass player and it never stop, at the moment I was thinking where the 3 guys got suck of energy.

Continue with Blues Pills at the main stage the Blues Pills. Honestly, I even don’t know this band just hear shortly I hear that they play kind like 60’s and 70’sclasic rock it was true what I was though before, great mixed with old and modern elements sound. they are a great musician whit full energy singer with barefoot all over the stage, their energy got the crowd dancing, moving, jump around seem all the audience are enjoyed the show.

We left their set a bit early and went to the second stage to catch the next band Bömbers Motörhead tribute band from Bergen, Norway. Featuring Abbath (ex-Immortal) on bass/vocals Tore Bratseth (ex-old Funeral) on guitar and Pez (Punishment Park) on drums. At the beginning, I did not realize that the vocal/bast player are Olve Eikemo as knowing the guitar player from Abbath was played the day before at the main stage. Their set was comprised mainly of the band’s greatest hits including “No Class”, “Iron Fist”, “Killed by Death” and “Ace of Spades”, as expected. It surprised me which makes a great job to capture Lemmy’s voice and his stage presence down to every minute detail. as well as the audience are enjoyed to hearing all hits of Motörhead.
Back to the main stage on the time at the main stage already crowded waiting for the headline for the fourth day of Metaldays. Opeth,

the Progressive Death Metal from Stockholm, Swedish were getting ready to perform. which opening song take from the latest album “Sorceress” followed by the classic “Ghost of Perdition”. the sound was great to come out in every each of instrument. but suddenly there was some technicians problem on the pedalboard of Mikael’s about 20 minutes the technicians try to fix the issue. Mikael assuring the audience that these things happen and that they’re working on a solution and Fredrik jamming on his guitar to keep the audience entertained. Finally. Mikael borrowed a spare board from Fredrik and the show was on again. i have been seen them many times in some another festival open air they always great in live performance.

Finally the last band at the second stage Sólstafir, Post-Metal/Rock from Icelandic. formed in 1995. The band’s name is the Icelandic word for crepuscular rays. I saw them for 2 years ago. Their unique blend of metal with beautiful melodies, psychedelic moments and a strong undercurrent of classic / hard rock comes as varied and at times appealingly bizarre as the landscapes of their native Iceland. these fellows delivered an incredible, emotional performance to a packed Boško Bursać Stage. The band’s hour-long set seemed to hit a chord with the audience, as the small stage sounded incredibly loud throughout the set. The atmosphere was highly positive, their signature depressive sound acting like a negative emotion filter. During their last song, Addi Tryggvason went down into the crowd, holding hands with the excited audience as he sung through “Goddess of the Ages” before bidding the crowd farewell

I was glad now is done time for us get relaxing after long day work. that was not easy to deal with a lot of bands which playing with a different stage like today we moved from the second stage into mainstage and new forces stage. but it was amazing show a lot of great bands today some we already knew and some are we just know was great experience today wait for the next day the last day of Metaldays.