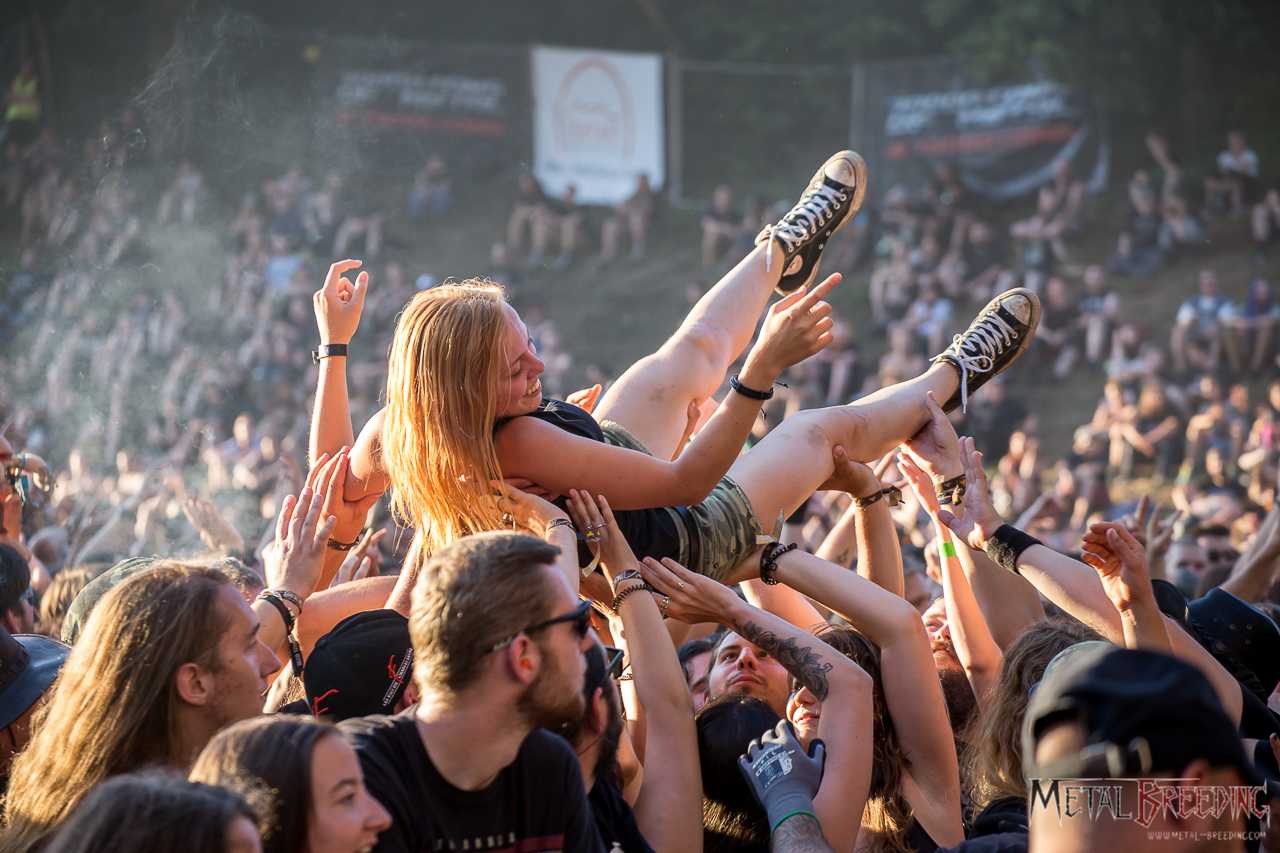 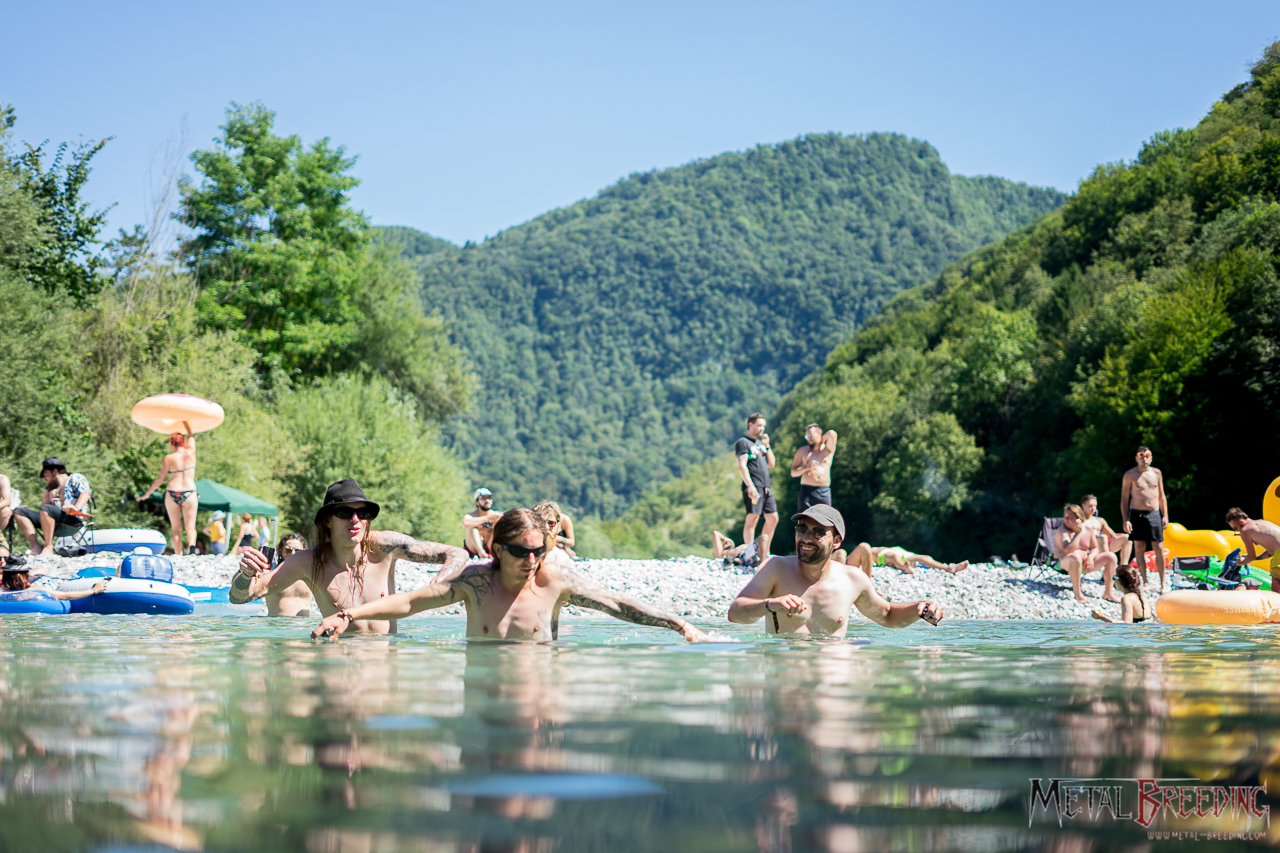 Just can’t believe how quick the time is running and today is our last day in this beautiful place, Tolmmin. We had really great time and a lot of fun, meet new people, new band, party, hanging out at Soca river beach ground, even was at the first-day and the second day we had not nice weather.
Today our plan is going to exploring the festival area get some photos that we couldn’t make before and then get some chillout at beach ground. About three hours already we were exploring the festival now to for us move to stage ground before the first band play at Boško Bursać Stage second stage.
Today begin with 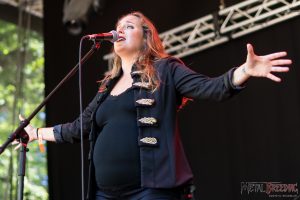 Martyr the opening band (Boško Bursać Stage) Symphonic Metal band from Spain. At the beginning, they are more into Death/Doom Metal.which female vocal. The band sound kind like a colossal mix of instruments with the orchestra complimenting the voices while haunting choirs are chanting unearthly melodies. with great composed quieter moments such as the acoustic which has strong traditional Folk leanings throughout and is faultless in its delivery. A great opening band very relaxes and great atmosphere. 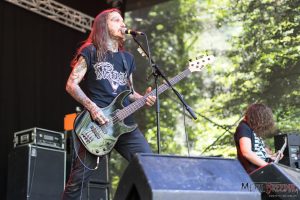 Next, the Germany Blackened Death Metal/Grindcore/Crust band Implore. The band was founded in August 2013 which band members from Barcelona, Berlin, Linz and Milan great combination. Sound kind old school classic Death Metal which mixed some Grindcore, Crustcore and Black Metal very interesting and great sound.There were bands like Nasum, Trap Them, Converge, Origin and Napalm Death among as influences whit lyrics talking about such as religion, fascism, animal rights and human rights. is just too sad that they are playing early it was not crowded enough for such great band like them. 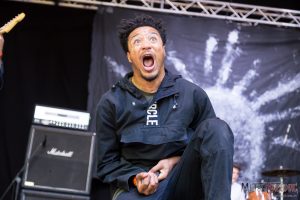 Still at the second stage (Boško Bursać ) the England Progressive metalcore Loathe. The band has been categorized as progressive metalcore, metalcore, death metal, nu metal, progressive metal, and experimental metal seem they are influenced by Slipknot, Deftones, Korn. Catchy riffs and groovy with a breakdown which delivered great sound it makes your head will move to follow the sound. was great performance even that was not my music I listening but they are great band thumbs up to a great job.
Time to move into the main stage (Lemmy Kilmister) to see the opening band for the last day at Metaldays 2017. A Thrash Metal band from Munich, Germany 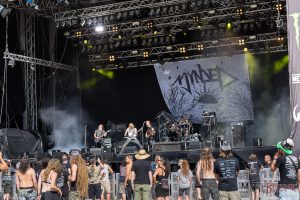 Mynded. Has been in the constant line-up since September 2012. Mynded The name actually means Mind Dead but they don’t want to put a name band with 2 words. Simple and catchy tune comes out. good to make war up for the audience even there was not so crowd enough but slowly they come out to join with them at the main stage. Very tight performance. 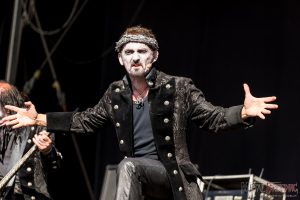 Hell the legendary an English heavy metal band from Derbyshire. They were amongst the first bands to wear proto-corpse paint as part of their stage show. Although they were largely ignored by the media and record companies in the 1980s, their music became known through the underground tape trading phenomenon, and the band achieved a degree of cult status. In 2008 they reunited and were signed by Nuclear Blast. Their first full-length album, Human Remains, was released in May 2011. Their progressive musical style incorporates elements of thrash, power, symphonic, gothic, speed, doom and black metal, encompassing great variety. As the frontman “David Bower” said “We are Hell from England, formerly of Europe. This is what happens when you let stupid people vote” To the joy of many, Dave descended among the crowd to baptize the audience at the end of their set.
Before the next band is hit the main stage we go back into the second stage (Boško Bursać ) to join a party with a Gore Grind band from the Czech Republic 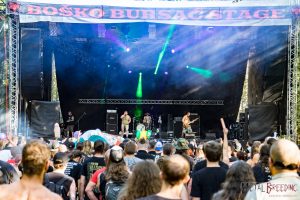 Spasm which the lead singer wears a thong and a Borat one-piece bathing suit and with white cock mask, they are very unique which not guitar player I can say they are gigolo goregrind Drum ‘n’ Bass band with low tempos and chunky riff it solidly within slam territory with chromatic punctuated by a couple of prowling bass breaks It makes the sound heavy as hell and stupidly violent, delivery of big circle pit which forming a colorful, with full of Confetti fly in the air and massive soap bubbles and a freak.even I show them already view time but it always nice to see them live performance. 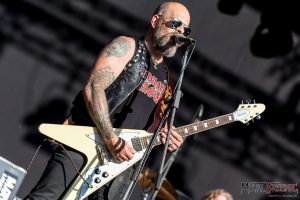 Next is a three-piece heavy metal band from Swedish Grand Magus at the main stage. While the Beggars are more in the traditional Deep Purple/Mountain camp of early rock/metal, Grand Magus originally opted for a bluesy, stoner-laced doom vibe, heavy on the early Black Sabbath riffing and tempos, As always the bands performance is spot on with their heavy sound always kept intact despite only being a three piece they built a solid relationship with the audience. 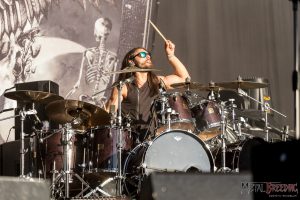 The German folk metal warriors Equilibrium seem ready to begin the show. they juggling the stage with replicas of trees and an imposing backdrop it matching of the atmosphere their music. Which tends to alternate between epic fills, double bass segments, and harsh blast beats the drum, harsh vocals with raspy black metal styled screams, groovy which very catchy riffs and melodious sound. it was truly creating epic atmosphere. they bring big crowd at the main stage on the time which continuously the crowd surfers during their performance. 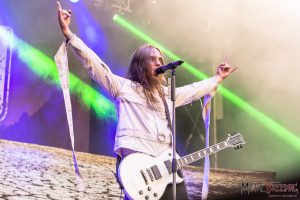 Still at the main stage where the Swedish project band called Pain just finish check sound see they are ready to begin the show. The band is a project band mixes heavy metal with influence from electronic and techno music. as a beginning, it was just hobby project from the frontman Peter Tägtgren who is also the vocalist/guitarist of Hypocrisy. they are is currently on tour promoting their latest release “Coming Home”. The mood was perfect throughout the show. perfect and it was very tight performance. but unfortunately we cant stay until the end the show because we must move to the second stage wanted to catch up Sinister. 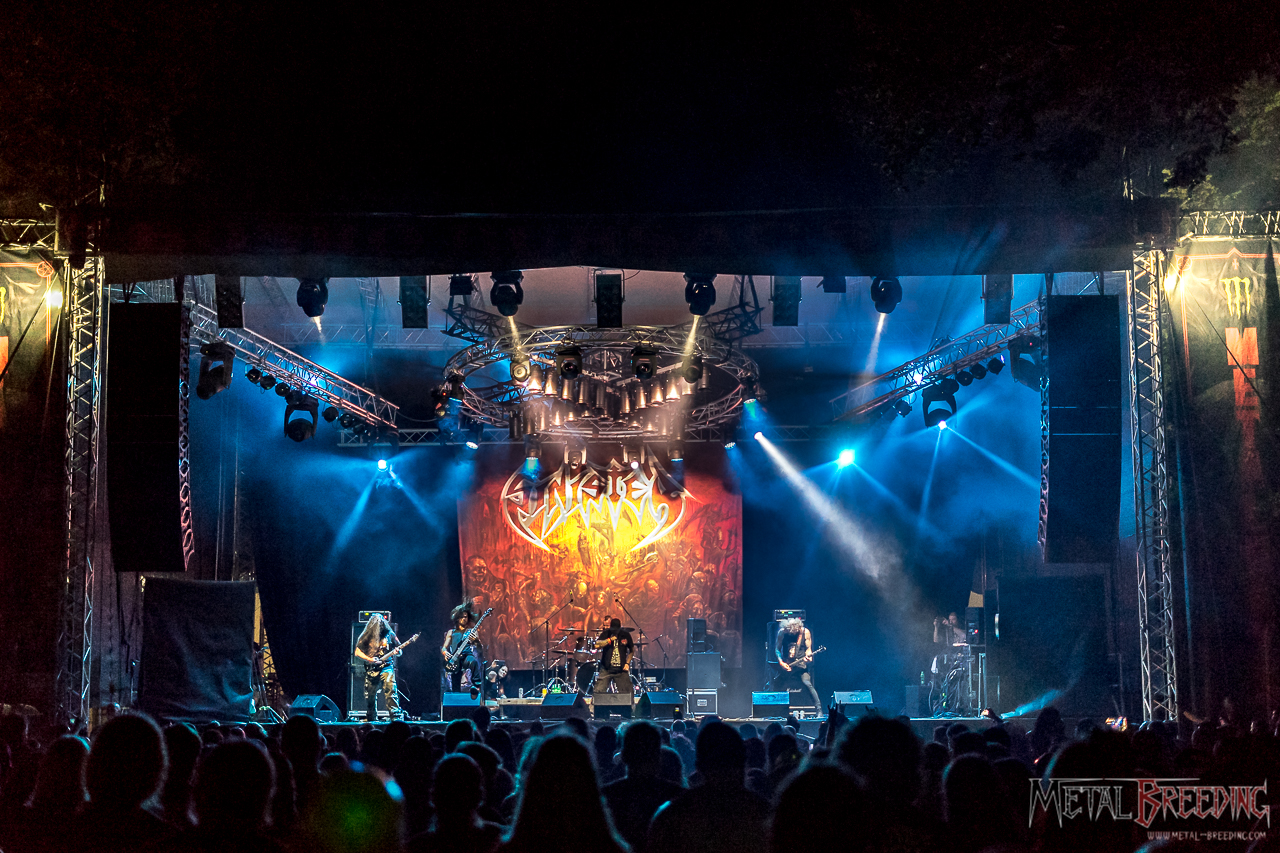 As we at second stage we just surprise it was crowded which colorful of the light and loud and heavy sound is come out from the stage it seems the show already started just lucky that we missed a couple of songs. The old school death metal from Netherlands Sinister, one of the bands we are waiting for. Sinister, in my opinion, one of the best was creating Death Metal tune back in the early/mid 90’s. they bring full of energy for the audience which keeps the circle pit are going on and the crowd surfers keep continuing during their performance. was great to see them live performance again, just forget when it was the last time I show them and also it would be great if they are playing at main. 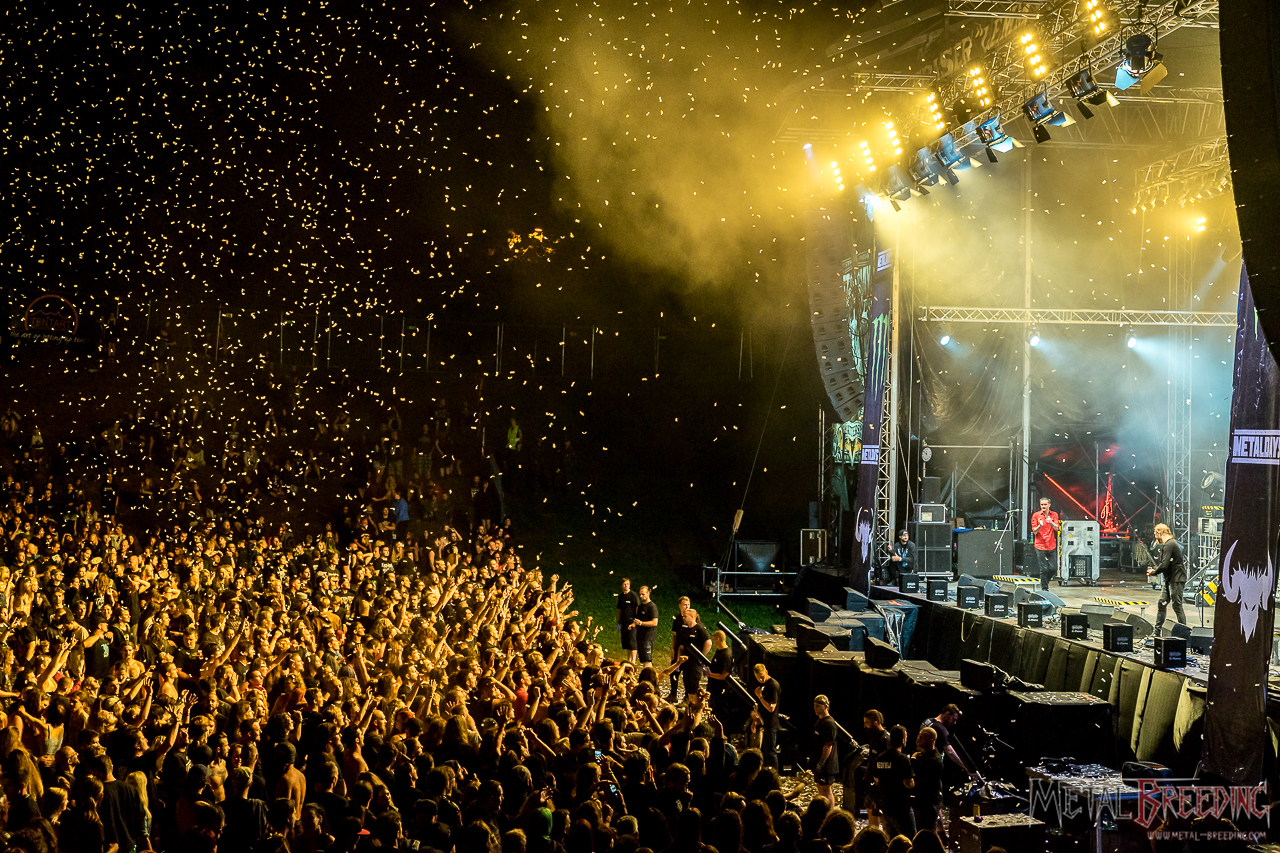 At the main time, it was crowded at the main stage after few minutes soundcheck is done, finally the headline band Heaven shall burn were ready begin the show. The Melodic Death Metal band from Germany are delivering a strong show using fire show elements, with the heavy participation of the moshing fans who are busy participating in the big Circle Pits and the Wall of Death and crowd surfing did not stop for a second but for the pauses between the songs. very tight performance even we cant stay until the end of the show. Because it was overlapped with the last band at the second stage. 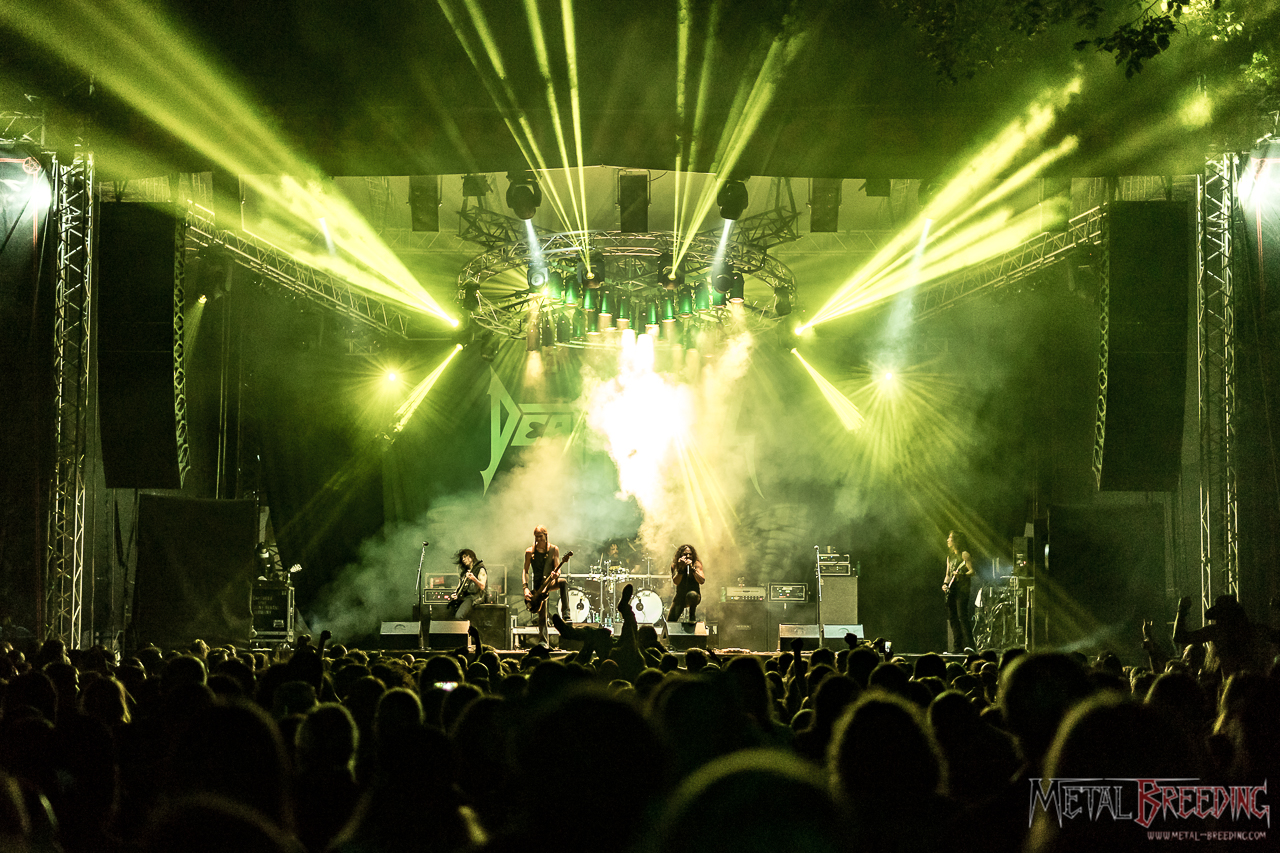 The headline band and the last band of the festival Death Angel an American thrash metal band from Daly City, California. one of the successful in Thrash Metal music genre every and have been in many concerts around the world. now they are here join with us on the last day of Metaldays 2017. Death Angel always a delivery big crowd and they gave an exceptional show it makes all of the audience goes crazy which circle pit getting big and bigger during the show and also crowed surfer. what for an amazing show which closed the festival with a violent.
What for the amazing time we had since the beginning of the festival until the end during 5 days we had a lot experience and excellent time meets new band that we never show before especially a new newcomer band, meet the peoples that we meet here every year and also meet new peoples. just can’t imagine how fast the time is running. Before we back to sleep we went to the party with all friends at beach Bar relax at beach river drink some beer while listening to music.